The pagan celebration of summer 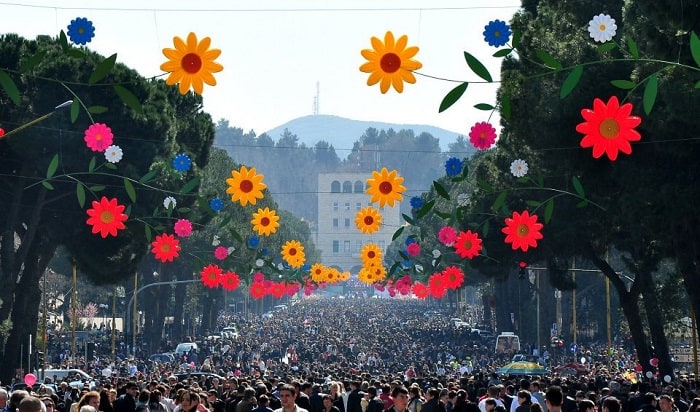 The pagan celebration of summer

March 14th marks the celebration of Summer Day, a national feast that originates from the pagan beliefs of Albanian’s Illyrian ancestors. Legends say that Summer Day is a celebration for the rebirth of nature after the end of the winter season and is also a sign of the rejuvenation of people’s spirit.

The center of celebrations is Elbasan, a city located in central Albania and well known for the production of the symbol food of Summer Day, a homemade cake named “ballokume”.

Every year, state institutions, NGOs and businesses organize festivals, exhibitions, handicrafts, and artisanal fairs, street parties, and leisure/sport activities for people of all ages. Most of the events take place in city centers and main boulevards throughout the country, from 9:00, am to 00:00 am of the next day. March 14th became an official holiday in Albania in 2004.

“Dita e Veres” is one of the oldest traditional day mostly celebrated in Elbasan. This festival origin is tracked to the temple of the Mountain Muse (Zana Malit) that was built near the city of Shkumbin (Elbasan). Muse was the goddess of hunting, forests and nature and she would come out of her temple only on March 14, which marked the beginning of the summer. This legend was passed from generation to generation, and the Summer Day festival is known for its unique cultural heritage and traditions. This popular celebration was a tradition that today identifies the city of Elbasan, known for its special cultural traditions. It is a community-wide event, with families often exchanging the traditional Ballokume, a sugar and cornflour cookie. Each family has its own recipe, considered a source of pride.  Some decades ago people went to Elbasan to celebrate this day, but now it became a national festival. In every city, people celebrate the end of winter in a very festive atmosphere and the tradition of cooking ballokume now is expanded from north to south of Albania.